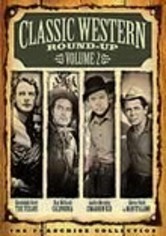 1938 NR 3h 11m DVD
Two Westerns examine a Union in transition. In The Texans, a former Confederate soldier (Randolph Scott) tries to get a fresh start in life as a rancher but is drawn into a plot to attack the Yankees. California follows Lily (Barbara Stanwyck) and Jonathan (Ray Milland), who join a wagon train to California during the gold rush. Lily becomes a wealthy saloonkeeper amid the political turmoil of the territory's impending statehood.