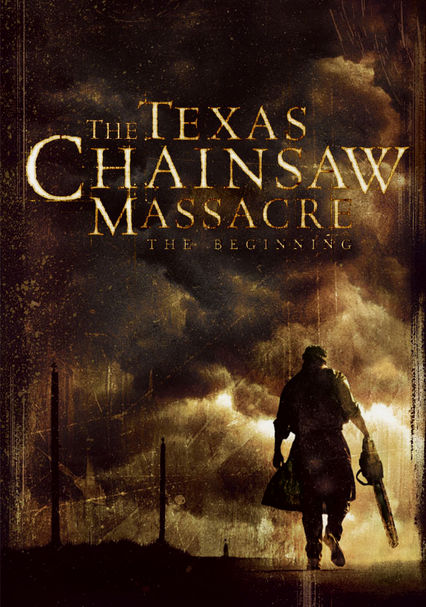 2006 R 1h 24m DVD
Two Vietnam-bound brothers out for a last fling with their girlfriends crash their Jeep. Suddenly, a psycho sheriff ushers them into a place where terror awaits in the form of young Leatherface.

Parents need to know that this grisly horror film isn't for kids -- though lots of horror-loving teens will want to see it. It's relentlessly bloody, dark-shadowed, and gruesome, with the titular chainsaw wreaking predictable (but still dire) havoc. Violence is graphic and incessant, with a range of weapons (guns, meat hooks, cleavers) producing severed limbs and body parts. A cow is smashed to bloody smithereens by a jeep; human victims are tortured (hung from hooks, tied up, taunted, stabbed, and sawed). The faux sheriff taunts a girl by pressing up against her and whispering ("I love you"). Some cleavage shots, and the girls' clothing appears in increasing disarray. Frequent foul language, mostly "f--k" and its permutations.

Hoyt leans into Bailey a couple of times, insinuating sexual interest and terrorizing her; girls wear short skirts, midriff tops, low-riding bellbottoms, showing some skin; their clothes become skimpier throughout the film due to ravaging, falling, water, and blood; brief moments of kissing between couples.

Blood everywhere. A birth scene at the beginning is pained and ugly, with lots of screaming (mother dies, baby is monstrous); baby Leatherface is trained to kill and cut up animals; brief shot of gross roadkill; chopping of animal parts emphasizes loud sounds and bloody aftermath; weapons throughout include handgun, knives, chainsaw, sawed-off and regular shotguns, meat hook, hammer, cleaver, bear trap; a jeep hits a cow (bloody mess all over the screen), then flips several times, leaving occupants bloodied and tearful; torture scenes show bodies tied to table, hanging from ceiling, nailed to table; Leatherface saws off his uncle's legs (explicit image) and saws through the backs of three other characters; kids attempt feeble stabbing and punching of their adversaries and are repeatedly beaten back, in gory detail.

Cigarette smoking and beer drinking in a bar.