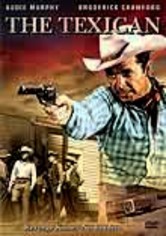 1966 NR 1h 28m DVD
Ex-sheriff Jess Carlin (Audie Murphy) has been living in exile in Mexico after being run out of Texas for a crime he didn't commit. But when his newspaperman brother is murdered, Jess slips back into the Texas town of Rim Rock to find out who killed him. Seems Jess's brother was about to blow the whistle on corrupt town bigwig Luke Starr (Broderick Crawford), the very same man who framed Jess. Lesley Selander directs.