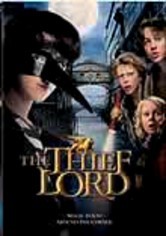 2006 PG 1h 39m DVD
To avoid being separated after the death of their mother, two brothers flee London for Venice, Italy, where they soon fall in with a band of orphan pickpockets led by an enigmatic teenager named Scipio -- who isn't what he claims to be.

Parents need to know that this movie, based on the book by Cornelia Funke, focuses on two orphaned brothers who run away to Venice to escape the reach of a horrible aunt. They are taken in by the Thief Lord, the teenage leader of a band of runaways whose criminal activities support the gang. Some scuffles pit adults against kids.

Some very mild flirting between teens.

Some relatively tame epithets, such as "skanky old bat," "screw up," and "lying piece of crap."

Family ties make up the heart of this story, especially a tender and loving bond between two brothers, and a bitter and hostile father-son relationship. Though the Thief Lord is the leader of a gang supporting criminal activities, he also acts as a father-figure to a band of runaway children, and his paternal role is endearing.

The movie is an ode to beauty of Venice, and portrays the Italian city as a charming and magical place.