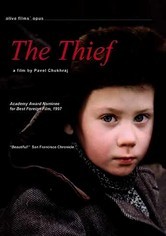 1997 NR 1h 33m DVD
In this Oscar-nominated film, widow Katya and her young child, Sanya, meet a handsome army captain, Tolyan, on a train in 1952 Russia. Posing as a family, the three find a rooming house where Tolyan becomes everyone's favorite. Tolyan charms with his good looks and generosity -- especially toward Sanya. But the relationship goes sour when Tolyan's plans for the rooming house become clear, and his real identity as a cruel thief is revealed.