The Three Investigators in the Secret of Skeleton Island 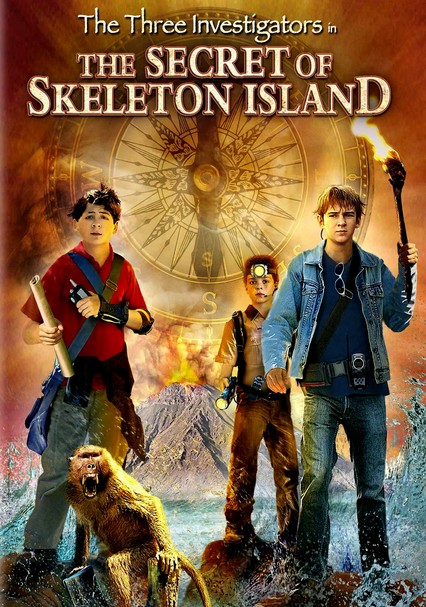 The Three Investigators in the Secret of Skeleton Island

2007 PG 1h 31m DVD
While vacationing in South Africa, adventurous junior sleuths Jupiter, Pete and Bob stumble upon a centuries-old mystery on nearby Skeleton Island. As construction workers flee a terrifying creature, the boys start to believe some foul play is afoot.

Parents need to know that this straight-to-DVD title is based on The Three Investigators book series created by Robert Arthur Jr. The three exceedingly intelligent boys are tween-age but manage to land themselves in rather adult dangers when they travel to South Africa. Guns are drawn and pointed menacingly, and there's a kidnapping, a chase over cliffs on paragliders, and a near-miss with a car. The scares may be the bigger deal for kids, though, with a cave haunted by a mysterious beast (who scratches victims), and the boys getting trapped in a small tomb that almost squashes them (there's talk of "we might die here"). Viewers will find positive messages about the importance of finding the truth and about how overcoming racial divides can have some truly positive consequences.

A kiss between tweens, some silly talk about where a tween girl will sleep if the three investigators need to share beds, and many mentions of "forbidden lovers" of long ago.

The three boys purposely put themselves in danger at the bottom of an elevator shaft as the movie opens; they are inches away from getting squashed. That foreshadows a scene in a tomb where the walls close in and they become almost squashed, then trapped with talk of "we could die in here." Caves are said to be haunted by a scary creature that at first viewers see only flashes of and scratch marks on necks of victims. Guns are pulled and pointed menacingly a few times and a child is held for ransom at gunpoint. A chase over cliffs with paragliders has a few moments where characters almost plummet to their deaths, but they land safely. A car crashes through a shack as the kids flee, and a gun loaded with itching powder hits its unfortunate victim. Two skeletons are shown propped up in a tomb. Talk of parents being lost, either by plane crash or early in life.

Finding the truth is of utmost importance to the investigators. And the first lesson of sleuthing is, "see what's right in front of you." There are also messages about overcoming racial divides (the mystery can't be solved until black and white characters work together) and protecting sites of historical and cultural significance.