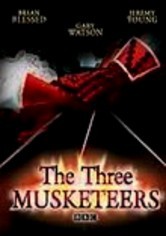 1966 NR 2 discs
Alexandre Dumas's oft-adapted novel comes to life once again in this 10-part black-and-white BBC miniseries that originally aired in 1966. As the story goes, the young D'Artagnan (Jeremy Brett) leaves home to become the fourth member of the Three Musketeers, a trio composed of Athos (Jeremy Young), Porthos (Brian Blessed) and Aramis (Gary Watson). Their subsequent adventures have them crossing paths with King Louis XIII of France (John Carlin).