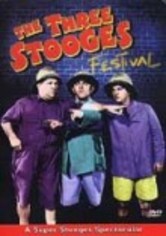 2001 NR 1h 0m DVD
This virtual "festival" of comedy celebrates the legendary Three Stooges with a collection of classic shorts including "Disorder in the Court" (1936), in which the Stooges are asked to testify at a friend's murder trial. Other highlights: "Heavenly Daze" (1948), in which Shemp's ascent to heaven is held up until he "reforms" Moe and Larry; and "Malace in the Palace" (1949), in which the boys hit the desert to recover a priceless diamond.