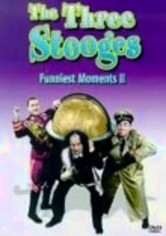 1965 NR 0h 48m DVD
The Three Stooges are zanier than ever in this second volume of their "funniest moments," a compilation of color footage that was originally filmed to run between animated segments on the 1960s TV series "The New Three Stooges." Over the course of these hilarious short skits, the incomparable Larry, Moe and Curly don a variety of disguises and personas, acting as soldiers, sailors, salesmen -- and even dentists.