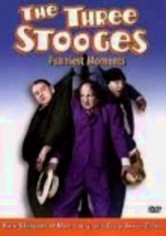 1965 NR 0h 50m DVD
These vintage clips were shot in 1965 during a period of renewed popularity for the Stooges. Intended to accompany their new animated television show, the excerpts feature Moe, Larry and Curly Joe clowning around in a series of skits. The full-color, rarely seen footage finds the trio bungling their way through camping trips and golf games; cleaning a dusty old mansion; playing checkers with a chimp; and much more.