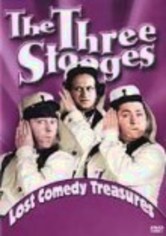 2001 NR 0h 57m DVD
This must-see collection of rare footage, television appearances and never-aired film clips is aimed directly at diehard Three Stooges fans. Highlights include "Hollywood on Parade," the Stooges' first film with Curly; "Nertsery Rhymes," a little-seen MGM short originally released in 1933; "Jerks of All Trades," the Stooges' ABC television pilot from 1949; and one of their final TV appearances in 1965 on "Danny Thomas Presents the Comics."