The Toilers and the Wayfarers 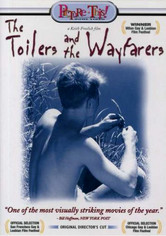 The Toilers and the Wayfarers

1995 NR 1h 16m DVD
Keith Froelich directs this coming-of-age tale about two gay teens (Matt Klemp and Andrew Woodhouse) who migrate from the conservative small town of New Ulm, Minn., to the big city of Minneapolis, where they wind up turning tricks to survive. Ralf Schirg co-stars as their twenty-something cohort, a man who's recently moved from Germany to America to find the freedom he sees on television and in Hollywood movies.