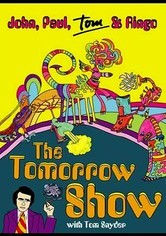 2008 NR 2 discs
Featuring John Lennon's last television interview (taped April 25, 1975), this compilation from Tom Snyder's popular late-night talk show also includes a 1981 interview with Ringo Starr and a 1979 interview with Paul McCartney. In his 1975 interview (which was rebroadcast in its entirety as part of a tribute that aired the day after his death), Lennon opens up about the Beatles, his solo work and his run-ins with the Nixon administration.