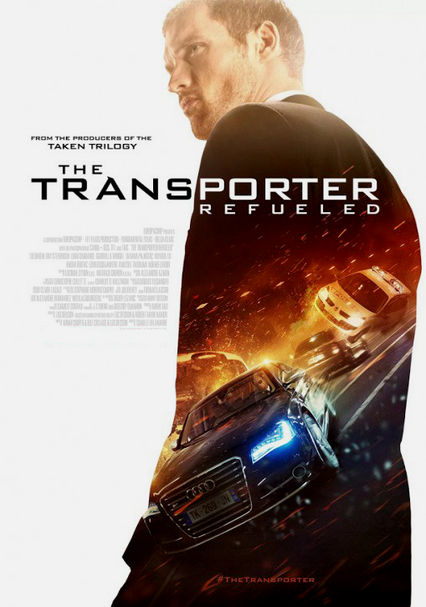 2015 PG-13 1h 36m Blu-ray / DVD
Carrying on the breakneck adventures of Frank Martin, the private mercenary known throughout the underworld as the Transporter, this action-rich reboot follows Frank in his all-out assault on the Russian gangsters who have kidnapped his father.

Parents need to know that The Transporter Refueled is the fourth in the Transporter action series, and the first without star Jason Statham (Ed Skrein steps into the title role). Expect lots of shooting, with many secondary characters dying, plus frequent martial arts fighting, car chases, crashes, and explosions. There's also a somewhat gory bullet-removal scene, a shot of burnt corpses, and a woman being pistol-whipped in the face. Women are also generally objectified, constantly being shown in skimpy outfits. Sex is implied, and one man is shown sleeping in a bed with two partners. Language includes one "f--k," plus "s--t" and "a--hole." Characters drink fine liquor frequently but never get drunk. Blatant product placement includes Evian water and Audi cars.

Strong, frequent fighting; not much blood or gore (aside from a somewhat gory bullet-removal scene). Guns are fired, and many secondary characters die. Burned corpses. Frequent martial arts fighting. Frequent car chases, exploding cars. Lots of peril/danger. A woman is pistol-whipped in the face.

The movie frowns on prostitution, but at the same time it objectifies women. Additionally, revenge is a central theme. Characters are forced to work together; there's no natural teamwork.

Audi cars are heavily featured. Evian water is mentioned several times (the company was an investor in the movie). Apple iPhones are frequently shown and used.