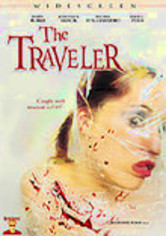 2005 NR 1h 45m DVD
A young couple lost in rural Pennsylvania seeks refuge at a ramshackle cabin where five friends are playing a sinister game. The couple joins in, but the group discovers that a dark force has also decided to participate. As the players start to fall, the survivors realize that they are truly alone -- and that nobody can protect them from the Traveler in this terrifying horror film starring Shawn Burke, Jonathan Skocik and Melanie D'Allesandro.