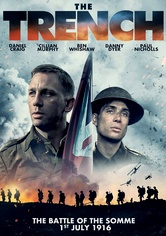 1999 NR 1h 35m DVD
On the eve of the 1916 Battle of the Somme, the worst defeat in British military history, a group of young soldiers confined to the front line experiences a mixture of boredom, fear, panic and restlessness as they await battle. At the center of the troops are 17-year-old Billy (Paul Nicholls) and his older brother, Eddie (Tam Williams), who, like their fellow squadron members, are just boys dressed as men ... and they all face an equal fate.