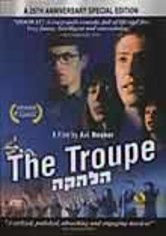 1978 NR 1h 52m DVD
This offbeat musical directed by Avi Nesher follows a dozen members of a crew (played in part by Gidi Gov, Gali Atari, Meir Suissa and Tuvia Tzaf) whose biggest mission is to entertain the Israeli Army soon after an arduous war. Although the performers are not at the frontlines, they, too, suffer tensions, learning to get along, making and breaking romances -- all while competing to become the best performer in the troupe.