The True Story of Che Guevera 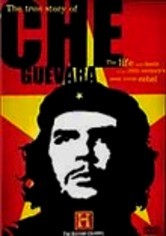 The True Story of Che Guevera

2007 NR 1h 34m DVD
In the years since his death, revolutionary Che Guevara has attained iconic status. This documentary explores the truth behind the myths, delving into Guevara's plans to spread his philosophy throughout Latin America and his ultimate effect on the Cold War. Biographer Jon Lee Anderson takes viewers from Guevara's Argentine homeland to the battlefields of the Cuban revolution and reveals the CIA's plot to quell the activist's tide of change.