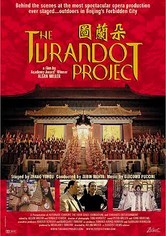 2001 NR 1h 24m DVD
This documentary from director Allan Miller takes you behind the scenes with conductor Zubin Mehta as he stages the Puccini opera "Turandot" in two decidedly different locations: Florence, Italy, and Beijing, China. The film focuses primarily on the unexpected areas of dramatic interest and conflict that opened up when the production, initially scheduled only for Florence, was given official permission to be remounted in Beijing.