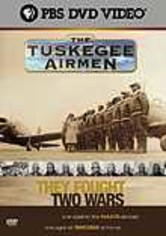 2003 NR 1h 0m DVD
The Tuskegee Airmen, the first African American military airmen, were known for their heroics during World War II. Away from the front, they fought a different battle -- one that was less bombastic but just as insidious: racism. These pioneering soldiers proved to America and the rest of the world that one's race has no bearing on one's ability to protect, serve and defend a nation. This PBS documentary recounts the challenges the men faced.