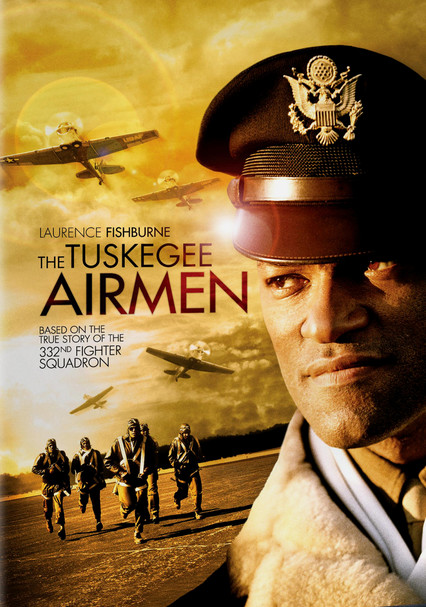 1995 PG-13 1h 46m DVD
In World War II, the 332nd Air Force squadron was honored for keeping casualties low and bombers safe. But it also made history because its members were the first African-American pilots to take to the skies for America. Few knew of their accomplishments, however, until decades later. Laurence Fishburne, Cuba Gooding Jr. and Andre Braugher lead a talented cast of characters who managed to serve despite the rampant racism they endured.

Parents need to know that The Tuskegee Airmen is a drama based on real events that occurred during WWII and a story of how the racial divide in America was slowly overcome. It was made for HBO but briefly released in theaters. Stock footage is used for the aerial and battle scenes, although some characters die, and some crashes are shown as is some blood. There's some very minor sexual innuendo, but language is fairly strong, with uses of the "N" word, "s--t," and "ass," as well as other words. Characters smoke fairly often and drink occasionally. The movie will be worth studying for students trying to understand African-Americans in history. Elements from the same story also were filmed as Red Tails.

There's some minor innuendo here, such as one character wondering if he has lipstick on his collar.

There are plane crashes (mostly stock footage), and many characters die. Characters argue and threaten one another. Some blood is shown.

The movie teaches historical lessons about racial bigotry and all the laws and rules used to govern it. It also teaches about the small steps taken to break through the racial barrier and the bravery of the men and women who took those first steps. Viewers should be aware that there are several scenes of racism as well as racist terminology.

Many characters smoke cigarettes, and characters drink wine in one scene.