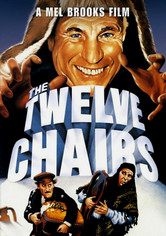 1970 G 1h 34m DVD
In this comedy directed by Mel Brooks, an aging ex-nobleman (Ron Moody) of the Czarist regime adjusts to life under the Communist commissars in Russia -- but jumps at the opportunity to find his family's hidden fortune. When he and the local priest learn that the jewels are hidden in a chair (one of a set of twelve) in the nobleman's estate, they return separately to Moscow to root out the loot. Frank Langella and Dom DeLuise co-star.