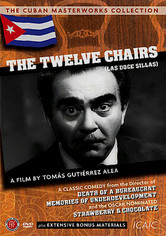 1962 NR 1h 30m DVD
This Cuban comedy follows the adventures of Hipólito (Enrique Santiesteban) after his wealthy mother discloses that she's hidden valuable jewels inside one of 12 identical parlor chairs, which have now been confiscated by the government. Will Hipólito track down the correct chair in time? Or will someone else recover the jewels instead? Directed by Tomás Gutiérrez Alea, this classic film also stars Reynaldo Miravalles.