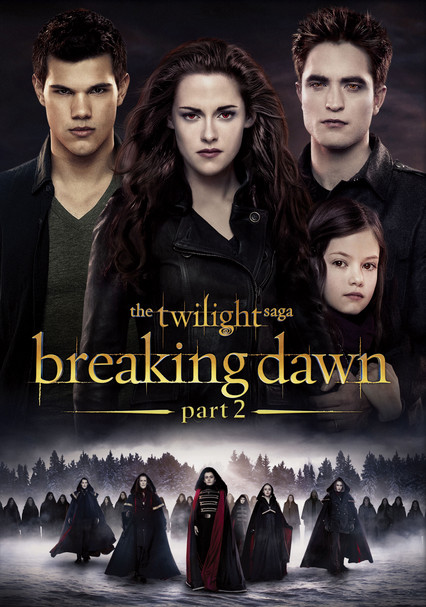 2012 PG-13 1h 55m Blu-ray / DVD
In the epic series' final chapter, Bella and Edward's newborn daughter forces the couple into a life-altering confrontation with the Voltri. Meanwhile, Bella's burgeoning vampiric power makes her the key to the future of her family and their kind.

Parents need to know that the final installment in the Twilight saga is a must-see movie for any fans (teen or otherwise) who've followed the series' page-to-screen adaptations -- as well as stars Robert Pattinson and Kristen Stewart's public relationship. The movie is fairly faithful to the second half of the Breaking Dawn book, except that it amplifies the violent nature of the book's climactic battle between the Cullens and the Volturi. Several characters are tortured, violently beheaded, burned, ripped apart by werewolves, etc., and there are some shocking deaths (though, overall, not much gore). There's one long, sensuous love scene (with close-ups of bare skin and faces and a glimpse of the side of Bella's breast, but nothing more graphic than that), as well as several passionate kisses between various couples. Language is minimal, as in all of the movies in the series.

Now that they're married, Edward and Bella have sex in a rather prolonged, sensuous sequence that tends to focus on close-ups of their faces and flashes of skin -- but no graphic nudity. In the final shot of the love scene, there's a glimpse of them standing in profile, and viewers can see their bare backs and the side of Bella's breast. Various passionate kisses both between Edward and Bella and other couples in the movie.

(Note: Potential spoilers ahead.). For most of the movie, the threat of violence looms, so the vampires practice their combat/defense abilities before facing the Volturi. In a flashback, a bloody-faced "immortal child" and his maker, a vampire "mother," are killed and burned. During the climactic battle scene, various characters (major and minor) are injured, beheaded, burned, and otherwise hurt -- and even killed (some of the deaths are likely to be shocking). One vampire can telepathically torture people, another immobilizes their senses, and other vampires show off their abilities in battle.

The final installment in the Twilight series is about fulfilling your personal destiny, as Bella realizes that she was "born" to become a vampire. The importance of family and friendship is pivotal, as Bella decides to keep her father in her life, and the Cullens summon their vampire friends from around the globe to stand with them against the wrath of the Volturi.

Bella drives a Volvo, but otherwise there are fewer obvious product placements than in some of the other Twilight movies. Off-camera, there's loads of Twilight-branded merchandise, including apparel, posters, games, calendars, jewelry, toys, and accessories.