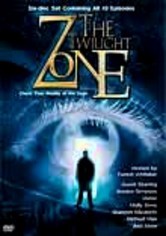 2002 TV-PG 6 discs
In the early 1960s, the TV series "The Twilight Zone," which was hosted by Rod Serling and featured some truly bizarre and eerie tales, created a sensation; now, you can enjoy the modern version of the pioneering series with this collection. Forty-three episodes from Season 1 -- featuring high-profile guest stars such as Jason Alexander, Vivica A. Fox and Cloris Leachman -- are included.

Parents need to know that this remake of the 1960s televison series deals in psychological tension. While there is some actual violence, it's usually more passive (i.e., a character is hit by a car) than hostile. The truly scary part of the series occurs inside viewers' minds when creepy scenarios meet supernatural elements, like mind reading, life after death, and imaginary creatures. Each episode effectively serves as a mini morality tale, so parents may want to be prepared to discuss their views on the episodes' subjects. Expect some mild language ("bastard," "jackass") and some occasional drinking.

Sex is implied but there is no graphic sexuality.

Some violent situations, depending on individual episodes, include characters being hit by cars, struck by lightning, or engaging in fist fights

Some marginal language including "bastard" and "jackass."

Viewers can interpret these episodes as mini morality lessons: For every action there is a consequence. However, consequences are not necessarily realistic or logical.