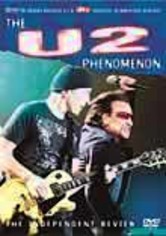 2005 NR 1h 31m DVD
Find out how four lads from Dublin went from winning a 1978 local talent contest to consistently selling out stadium concerts with this unauthorized look at U2. From their early days playing small Irish clubs to their smash hit 1997 album, "The Joshua Tree," and beyond, this independent review chronicles the band's highs and lows, digs into their creative process and hit singles and reveals the secrets behind the group's phenomenal success.