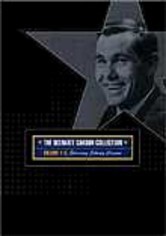 2002 NR 3 discs
For 30 years, "The Tonight Show Starring Johnny Carson" entertained late-night audiences with a unique charisma that made the comedic talk-show host a legend and the show a consistent hit, nabbing 19 Emmy nominations (with seven wins). The best moments are compiled here, including decades of absolute lunacy, early stand-up appearances from David Letterman and Eddie Murphy, behind-the-scenes featurettes, his final show as host and much more.