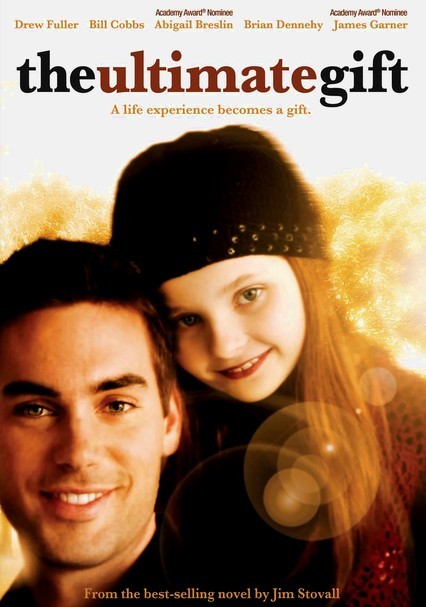 2006 PG 1h 54m DVD
When his wealthy grandfather finally dies, Jason Stevens fully expects to benefit when it comes to the reading of the will. But instead of a sizable inheritance, Jason receives a test, a series of tasks he must complete before he can get any money.

Parents need to know that The Ultimate Gift is a faith-based, message drama that includes several deaths and has some very sad moments. A very unlikable young man is awakened by his boss using a cattle prod, left without resources to fend for himself on the streets, and is captured, beaten, and threatened with death by drunken drug dealers. There is some mild cursing ("hell," "screw him"), and several scenes in which characters drink and smoke. Spoiler alert: A little girl with leukemia, in whom the audience is heavily-invested, dies off camera. Her death may be very upsetting to kids.

Some romantic, gentle kissing as a relationship blooms. A man observes his girlfriend (in a skimpy outfit) kissing her new love. Discussion of the circumstances surrounding a child born outside of marriage.

A harsh sequence in which a group of guerilla drug dealers capture, imprison, and beat up the hero and his friend. They are threatened with death. A rancher thinks it's funny to awaken his employee using a cattle prod. The protagonist slaps two obnoxious bullies.

Thorough delivery of obvious messages: finish what you start; be free to dream; the "promised arms" of God and Jesus are meant for you; most very rich people are selfish and ignorant; true fulfillment comes from helping others. The actual "ultimate gift" is finally revealed to be a well-lived life,which includes a combination of friends, money, work, learning, family, laughter, gratitude, giving, love, problems, dreams, and making each day count.

Early in the movie, the leading man smokes. Several scenes show moderate social drinking: champagne on an airline flight, at Thanksgiving dinner, celebrating a library opening, relaxing at home. Drug lords chug-a-lug from a bottle as they intimidate and threaten their captives.