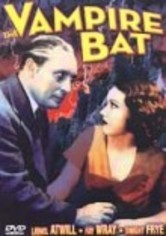 1933 NR 1h 3m DVD
When a rash of mysterious murders convinces the people of Kleinschloss that their village has been invaded by vampires, it's up to police inspector Karl Brettschneider (Melvyn Douglas) to restore order and capture the real culprit. A true low-budget horror classic of the 1930s, this creepy effort from director Frank R. Strayer features many of the era's greatest players, including Fay Wray, Lionel Atwill, George E. Stone and Dwight Frye.