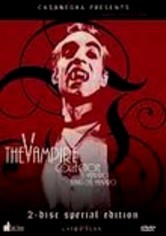 1956 NR 2 discs
Get ready to sink your teeth into this twin bill of Mexican horror films starring German Robles as dapper bloodsucker Count Karol de Lavud. In The Vampire, the nobleman turns up at the ancestral home of Marta Gonzale (Ariadna Welter) to resurrect his brother … whose crypt is part of Marta's house. In The Vampire's Coffin, grave robbers unwittingly revive de Lavud -- who promptly transforms them into undead minions to do the aristocrat's bidding.