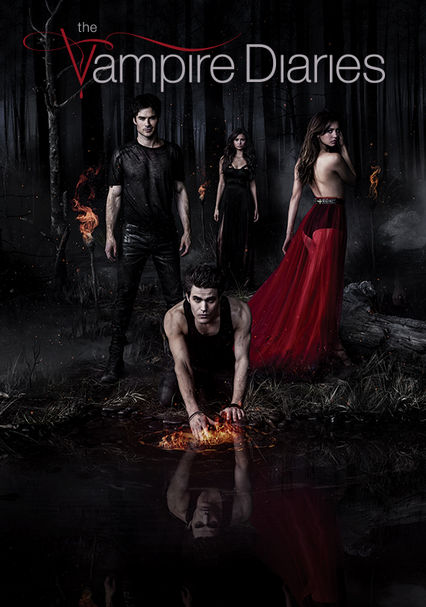 2009 TV-14 5 seasons
Trapped in adolescent bodies, feuding vampire brothers Stefan and Damon vie for the affection of captivating teenager Elena, who attempts to unravel the many dark secrets of her hometown of Mystic Falls.

In its third spooky season, the teen drama series sheds an eerie light on the mysterious and blood-soaked past of rival vampire siblings Stefan and Damon. Meanwhile, Damon and the bewitching Elena are drawn ever-more tightly to each other.

As a new villain arrives in Mystic Falls and sets about destroying it, Elena and her friends become more focused on their connection with their hometown now that they're preparing to graduate.

There's life after high school for mortals and vampires alike as the Mystic Falls gang heads to college in the fifth season of this spooky drama. Along with the new environment come new faces, including a handsome prof and an uber-cool upperclassman.

The Vampire Diaries continues for a sixth season with delicious drama to sink your teeth into. Last season, after a passionate summer with Damon, Elena headed to Whitmore College with Caroline, not knowing Bonnie sacrificed her life for Jeremy's. Meanwhile, Stefan and Caroline's friendship deepened as they stood up to the Travelers, a nomadic witch tribe driven to strip Mystic Falls of magic and cast out its supernatural residents.

With dark attitudes and even darker intentions, three villainous heretics -- Valerie, Nora and Mary Louise -- join the dueling spirits of Mystic Falls and quickly begin to wreak havoc on the community.

Parents need to know that teens will probably want to watch this slickly produced supernatural drama. One obvious reason is that The Vampire Diaries is about young people -- and attractive ones at that. It also plays into the popularity of vampires and all things otherworldly. That said, it's a lot edgier than Twilight, making it an iffy choice for younger teens. For one thing, the violence is pretty graphic -- although most of the time, it isn't over-the-top gory -- and some scenes between characters are pretty steamy. The show also tends to portray underage drinking as commonplace without showing too many serious consequences.

Some heated kissing between teens and references to casual sex and seduction. Characters equate the term "hooking up" with actual intercourse, with no emphasis on practicing safe sex.

Violent conflict (including vampire attacks and hand-to-hand combat that involves people throwing each other into buildings and out of windows, etc.) is part of every episode -- and so is blood. Characters also experience life-altering moments of violence, including death.

The central conflict pits a good-hearted vampire against his evil vampire brother -- and his own baser instincts. But underage characters also drink without clear consequences and make references to casual sex.

Some advertising (for Bing) appears on the screen during the show, and characters from the series are appearing in commercials that air in conjunction with the show.

Most of the main characters (including the heroine) drink alcohol socially on occasion, even though they're underage. Some drink to the point of being drunk, although there are rarely any consequences for their actions. Some characters smoke cigarettes, and one character has a serious drug problem, although he attempts to get clean over the course of the series.