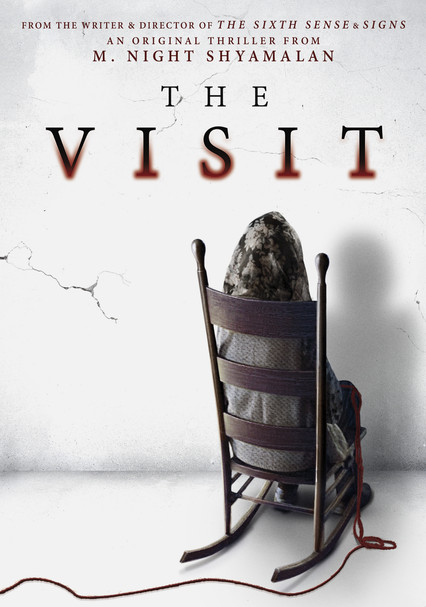 2015 PG-13 1h 34m Blu-ray / DVD
When a single mom sends her two youngsters on a weeklong visit to their grandparents' isolated Pennsylvania farm, the kids soon realize that their hosts are engaged in some dark doings -- and the vacation turns into a nightmare.

Parents need to know that The Visit is a found-footage horror movie from director M. Night Shyamalan. There are plenty of spooky images, sounds, and dialogue, as well as jump scares and a small amount of blood and gore. Viewers see dead bodies (including one killed in a rather shocking way), and two teens, 13 and 15, are frequently in peril. The 13-year-old boy fancies himself a ladykiller, which leads to some minor innuendo, and the "Nana" character's naked bottom is shown a couple of times. Language includes a use of "f--k," plus "s--t," "bitch," and more, most frequently spoken by the 13-year-old. Adult characters infrequently smoke cigarettes, and there's a very brief, mimed reference to smoking pot. Shyamalan is a filmmaker whom horror hounds love to hate, but this movie could be a comeback that fans will want to see.

Teens learn to overcome past fears to deal with current situations. They sometimes work together but at other times are forced to split up.

Skype is used as part of the plot. Sony laptop shown. A Yahtzee! game, with references to toy companies Hasbro and Milton Bradley.