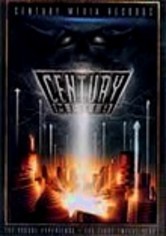 2006 NR 2 discs
For more than a decade, Century Media Records has led the charge in independent metal music. This retrospective revisits some of the landmark videos from the label's archives, featuring killer Goth, death, black and power metal performances captured on film. Videos include "The Immortal" by Arch Enemy, "Nocturna" by Moonspell, "No One There" by Sentenced and tons more. This collection is a must-see for every brand of metalhead.