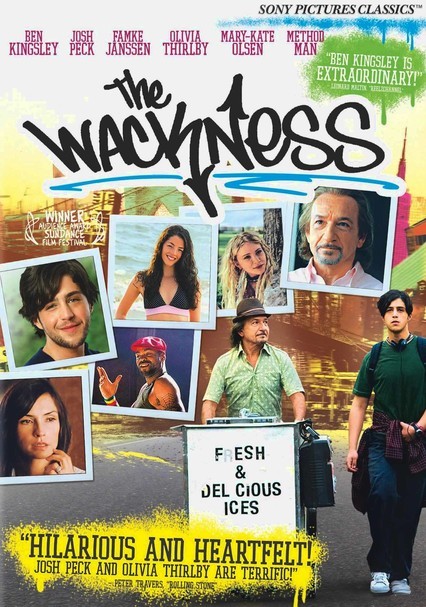 2008 R 1h 39m Blu-ray / DVD
In the midst of a midlife crisis, a psychiatrist forms a relationship with a teenage pot dealer, who trades his product for therapy sessions. Drugs, depression and relationships drive the action in this offbeat indie comedy.

Parents need to know that although this movie stars Josh Peck from the wildly popular sitcom Drake and Josh, it's definitely not aimed at the Nickelodeon show's tween fan base. The film centers around an awkward high school senior who's a marijuana dealer. Like many coming-of-age-stories, it focuses on the mature themes of burgeoning sexuality (including several love scenes, jokes about virginity, and glimpses of a naked backside and breasts), drug use (many, many shots of teens and adults smoking pot), and first love. There's also a fair amount of drinking and cigarette smoking among 18- to 20-year-olds.

A character tries to commit suicide a couple of times; a wife scratches her husband's face; a drug dealer's bodyguards sport machine guns; a man says he's in jail for gruesomely hurting his wife.

A teen tries to help his parents with the money he earns selling drugs. Compared to the male protagonist, a teen girl is depicted as unapologetically sexually experienced.

No overt products (unless you count marijuana), but there are many references to musicians like Notorious B.I.G., A Tribe Called Quest, De La Soul, Kurt Cobain, Pearl Jam, and other early-'90s artists.

Near-constant marijuana use and dealing, including scenes and discussions of joints, blunts, bongs, etc. There's a great deal of underage drinking and cigarette smoking as well, plus a couple of scenes of people snorting or pill-popping prescription drugs like Ritalin and Valium.