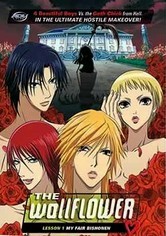 2006 NR 3 discs
In this comical anime series based on the manga by Tomoko Hayakawa, four boys are tasked with turning a Goth princess into a beauty queen. If they succeed, they win the rights to stay as long as they'd like in a stately mansion owned by the girl's wealthy aunt. But since Sunako, a moody horror film aficionado, is hell-bent on staying exactly the way she is, the transformation won't be easy to pull off.