The Walls of Hell 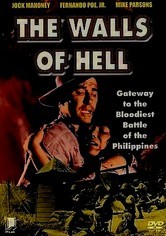 The Walls of Hell

1964 UR 1h 28m DVD
The World War II story of the Japanese Navy's last stand in the walled Philippine city of Intramuros is the subject of this Philippine-American action drama. After Japanese troops retreat to Intramuros with 10,000 Filipino captives, American Lt. Jim Sorenson (Jock Mahoney) -- whose wife is one of the prisoners -- leads guerrilla forces on a dangerous rescue mission. Escaped prisoner Nardo (Fernando Poe Jr.) helps Sorenson and his men.