The War Zone: Paris to the Rhine 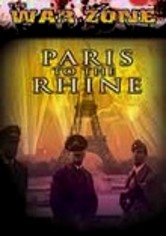 The War Zone: Paris to the Rhine

2007 NR 0h 55m DVD
As France celebrated its newfound freedom, the countries still under Nazi control continued to face grim circumstances during the fall and winter of 1944 and 1945. This fascinating documentary traces the military actions of that World War II season. Newsreel footage and interviews bring the events to vivid life as Allied invasion forces squeezed the weakening German Reich, closing in from Italy, France, Russia, Belgium and Holland.