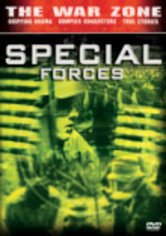 2002 NR 0h 55m DVD
Trained in unconventional warfare, foreign languages, a range of technical skills and so much more, America's special forces serve a chief role in the military, yet little is known about these courageous groups. This documentary chronicles the history of America's elite military units, including the venerated Green Berets, and explores the myths and legends that surround this mysterious faction of the armed forces.