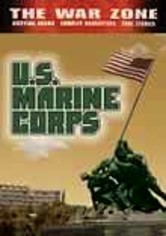 2005 NR 0h 55m DVD
Founded in 1775, the body of soldiers known as the U.S. Marine Corps has served as a versatile, fast-response task force specializing in emergency operations. Featuring extraordinary archival footage, this documentary chronicles the history of the Marines. The program explores the military's increasing reliance on the Marines' amphibious assaults during World War II and covers the role the corps played in Korea and Vietnam.