The War at Home 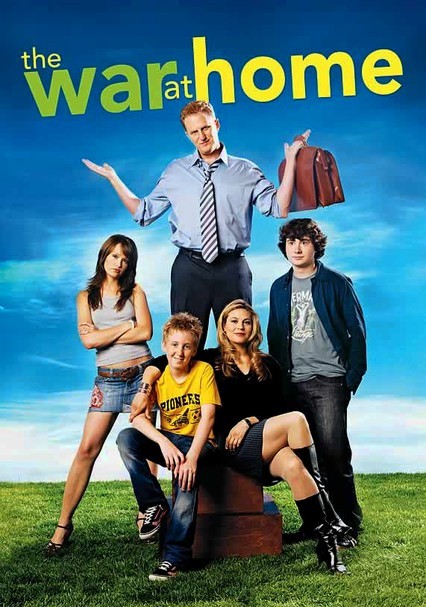 The War at Home

2005 TV-14 1 season
This smart family sitcom follows Long Island couple Dave (Michael Rapaport) and Vicky Gold (Anita Barone), wild-child progeny of the Me Generation who view parenting from the other side now that their three kids are taking teenage liberties. Whether Mom and Dad are confronting 17-year-old Hillary (Kaylee DeFer) about Dave's depleted pot stash or trying to ban alcohol but going on a bender themselves, setting a good example proves a daily dilemma.

Working parents Dave (Michael Rapaport) and Vicky (Anita Barone) are old enough to have three teenage kids (Kyle Sullivan, Kaylee DeFer, Dean Collins) but not so old that they don't remember what it was like to be that age. Now, all dad wants is to get the youngsters into college without police records or children of their own in this Fox sitcom that features fantasy sequences and characters revealing their thoughts directly to the camera.

Parents need to know that the humor here is geared toward adults, although kids will certainly pick up on some of the risqué references. A lot of the situations revolve around sex, including references to cross-dressing, bisexuality and homosexuality, and implied oral sex. One episode featured a missing "secret stash" of marijuana that belonged to the parents. The program is primarily from the parents' point of view, so there is a "behind the curtain" view into what these parents are really thinking. This "honesty" and sarcasm is something not all kids will understand or be ready to handle. The series follows The Simpsons on Fox's Sunday night, so kids may be interested, especially since the type of humor is similar (although a bit more obvious). Watch a few episodes before making it part of your family-hour.

Father is shocked his daughter is dating an African-American boy, parents suspect oldest son is cross-dresser.

In one episode, parents' "secret stash" of marijuana is missing.