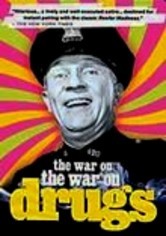 2005 NR 1h 24m DVD
Shot with a team of nonprofessional actors, Cevin Soling's frenzied collection of comedic "bits" makes a joke out of the "War on Drugs." The politically incorrect lineup of off-the-wall skits includes "Dr. Science" (a children's television show that teaches kids how to make LSD), "Satan's Stepchildren" (a compilation of black-and-white movie clips with overdubbed dialogue) and "Frogman Versus Welder" (a parody of European art films).