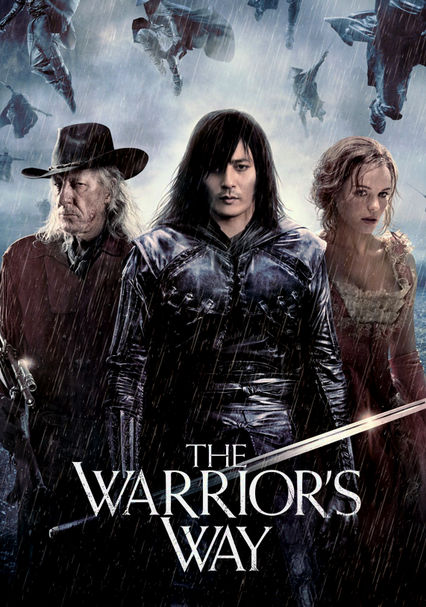 2010 R 1h 40m Blu-ray / DVD
Fugitive Asian assassin Yang journeys from the Far East to the Wild West, where he holes up in a tiny town in the American badlands. There, he meets local drunk and ex-fighter Ron, as well as a beautiful circus knife thrower with a dark secret.

Parents need to know that this action-packed movie -- which blends elements of Westerns and Asian martial arts movies -- is brimming with cartoonish violence. There's lots of fighting with swords, knives, and guns, plus spraying blood and plenty of dead bodies -- but it's all done without any real sense of danger. Some of the violence (less bloody but still potentially upsetting) is directed toward a young girl and a woman. The hero and heroine flirt and kiss (and she uses a low-cut dress to help her seduce a bad guy), and one character is presented as a comical town drunk. Language is infrequent and includes a few uses of words like "s--t" and "damn."

The hero and the heroine flirt and share one passionate kiss. The hero is seen without his shirt in one shot; later, the heroine wears a frilly dress that reveals cleavage. She uses the dress to seduce the villain, whom she intends to kill, and there's a little bit of "foreplay" (he licks her neck). In one shot, two teen girls are being scrubbed in a tub.

Extreme but cartoonish violence includes many dead bodies, plus spraying blood, swordfighting, gun-fighting, knife-fighting, dynamite, and explosions. A frying pan filled with hot grease is splashed into a character's face. The villain and his henchmen also commit violence against a young girl, dragging her through the streets, kicking her, and eventually shooting her and killing her family. Later, these same villains treat a grown woman roughly, pinning her down on a bed with the suggestion of attempted rape (she's rescued). In some scenes, a baby is present during moments of violence.

Language is infrequent but includes "s--t," "goddamn," "damn," and "hell." The bad guys also use a couple of racial slurs against the Chinese (actually South Korean) lead character, including "yellow" and "chink."

Although the hero starts out killing everyone he can as part of a clan war, his course is eventually changed, and he learns to work with others and to help the townspeople face impossible odds. He also learns friendship and understands that to build and grow things is better than to destroy them. (Unfortunately, this lesson doesn't stick all the way to the end of the story.)

One character is portrayed as the town drunk, but his antics are comical; he doesn't really have a drinking problem, and he sobers up when necessary. Minor characters occasionally drink whisky.