The We and the I 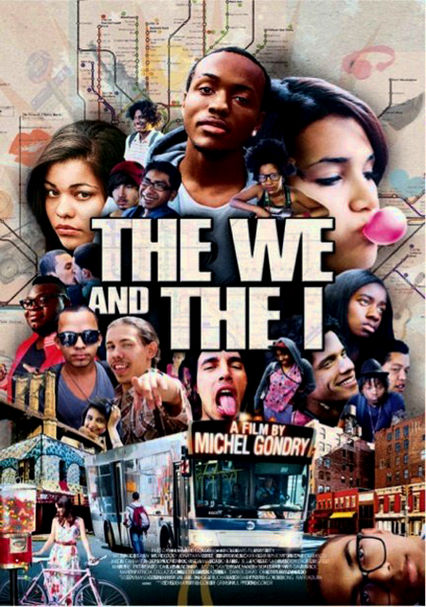 The We and the I

2012 NR 1h 43m DVD
It's the last day of high school, and as a group of teenagers in the Bronx ride the bus home for the final time, their hopes, dreams, issues, sorrows and evolving relationships are revealed in this indie drama.

Parents need to know that The We and the I offers a realistic look at a bunch of New York high school students taking a city bus home on the last day of school. All the teenage drama you'd expect is present as characters flirt, bicker, tease, and show off. The film captures youth in all its glory, and the teens all look, act, and sound exactly like real people. Expect near-constant swearing ("f--k," "s--t," and more), and some flashback scenes that include underage people drinking at parties (sometimes to the point of unconsciousness) and smoking cigarettes. Many characters talk about sex, and a few are actually shown fooling around, again in flashbacks, with some very brief nudity (breasts).

Many discussions about sexual encounters, some flirting and kissing, and some flashbacks that show people fooling around. A few scenes feature brief glimpses of breasts, and there's a realistic drawing of a nude man. One girl has a sexual encounter while she's extremely drunk and doesn't seem to be making informed decisions.

Plenty of bickering and arguing among high-spirited teens, and a few spats escalate into shoving, wrestling, and slapping. One random street encounter has a tragic ending that occurs off screen, but the news affects many of the characters.

Plenty of swearing as a group of rambunctious teens talks, teases, yells, bickers, and brags very realistically, incorporating profanity into almost every conversation -- including very frequent use of "f--k," "s--t," "ass," "d--k," "bitch," and more. African-American characters often refer to each other using the "N" word.

Beneath the bluster, the teens in this film just want to be liked. While they spend most of the film bickering, teasing, posing, and showing off, a few eventually manage to let their guard down and connect with each other.

Every character is deeply attached to their mobile phones, including models from Apple, Samsung, and other popular makers.

Some flashbacks show teens at parties drinking, sometimes to the point of unconsciousness. A few people smoke cigarettes on a city bus. Characters discuss their past exploits involving drinking.