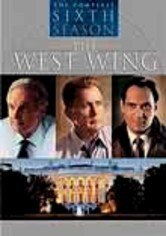 2004 NR 6 discs
A new race for the White House is on in the sixth season of this Emmy Award-winning television drama, tracing the tail end of President Bartlet's second term as multiple sclerosis tightens its grip on his mobility.