The White Horse Is Dead 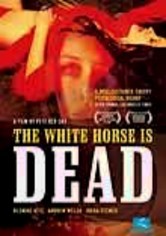 The White Horse Is Dead

2004 NR 1h 40m DVD
Living with a sex-crazed mother (Irina Stemer) who encourages her to use her looks to get ahead, 17-year-old Naya (Resmine Atis) resorts to putting leeches on her body to draw out the pain. With the arrival of a handsome gardener (Andrew Welsh), Naya tries to take her mother's advice -- but mom's insatiable lust only serves to make things worse. Pete Red Sky writes and directs this independent drama, marking his feature film debut.