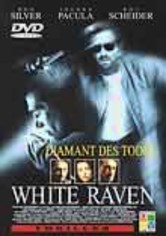 1998 R 1h 33m DVD
Reporter Tully Windsor (Ron Silver) is pulled into the chase for the world's second largest diamond after his editor (Roy Scheider) realizes that a story Tully wrote years ago may have clues about the gem's location. The diamond, called the White Raven, was used during World War II to ransom a girl from a Nazi concentration camp. The original owner wants it back, as do a group of former Nazis and a gang of mobsters. Can Tully find it first?