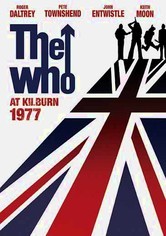 1977 NR 2 discs
In December 1977, rock gods the Who met at the Gaumont State Theatre in Kilburn, North London, to record a set for the film The Kids Are Alright, but the show would prove to be one of drummer Keith Moon's final performances. The rare concert, shot in 35mm, features "I Can't Explain," "Substitute," "Baba O'Riley," "Behind Blue Eyes," "Dreaming from the Waist," "Pinball Wizard," "My Generation" and more.

Cast
The Who, Keith Moon