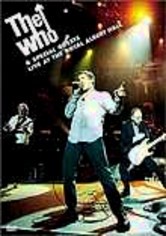 2000 NR 2h 24m DVD
Capping off the Who's six-month North American and U.K. tour, this legendary performance by the infamous rock band was filmed live on Nov. 27, 2000, at the Royal Albert Hall in London. The gig was a fundraiser for Britain's Teenage Cancer Trust. Joining the band onstage for some of the nearly two dozen energy-filled numbers were special guests Bryan Adams, Noel Gallagher, Kelly Jones, Kennedy, Paul Weller and Eddie Vedder.