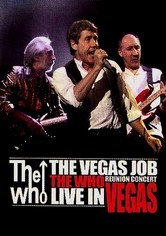 1999 NR 1h 55m DVD
In 1999, original Who members Roger Daltrey, Pete Townshend and John Entwistle were joined by Zak Starkey and John Bundrick for a spectacular reunion concert in Las Vegas's MGM Grand Hotel. Technical difficulties thwarted the original intention of broadcasting the gig over the Internet, limiting this tour-de-force show to the lucky fans present that night, until now! Songs performed include "I Can't Explain," "Pinball Wizard" and "Baba O'Riley."