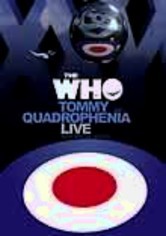 1989 NR 3 discs
In these memorable live versions of The Who's world-famous rock operas, an impressive lineup of stars take on the well-known roles of pinball wizard Tommy and moody mod Jimmy. A 1989 performance of "Tommy" filmed at Los Angeles's Universal Amphitheatre features appearances by Elton John, Phil Collins, Billy Idol, Patti LaBelle and Steve Winwood, while a then-unknown Alex Langdon stars in the 1996-97 world tour of "Quadrophenia."